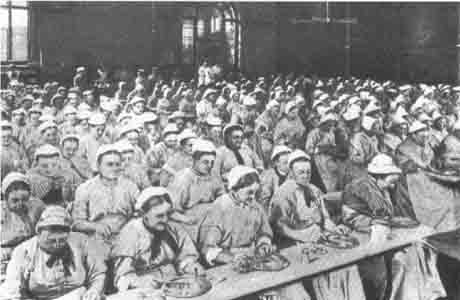 Conveyor belt sushi was sort of destined to come from Japan. The idea of a conveyor belt based restaurant at all, pretty much had to come first in the form of Asian restaurants. Japan, the homeland of sushi, in particular has been innovating restaurant presentation for many years. They have made moves to incorporate elaborate interactive shows and technologies in an effort to make the dining experience more fulfilling not just in flavors but in a full on sensory immersion. This has lead to theatrical restaurants that incorporate hyper specific personal aesthetic tastes in culture and tone, from goth themes to abstract futurism into the dining experience. These quirky places can be seen pretty regularly on the Food Network and Travel Channel where this kind of cultural tourism has picked up a lot of steam. The conveyor belt sushi restaurant is a different variation on the same effort to innovate. Practical eating is often viewed as a very American idea. The assembly line first utilized by the Ford Motor Company in the production of cars is of course the place that the conveyor belt it’s self first gained a foothold on the consciousness of the world. Food service integrated the idea of an assembly line with the innovations of Ray Kroc’s McDonald’s. Conveyor belt sushi takes the assembly line out from the production part of the business and into the consumption part, while offering a far healthier food option than calorie packed grease patties and french fries. The fun of conveyor sushi is in the speed with which everything moves and in the ability of the customer to define their own eating experience, making choices in a new-fangled à la carte sort of way. You get to experience the visual pleasure of a wide variety of sushi as well. This works particularly well for the food as it is made to captivate the eye as well as the taste buds. The clever blending of fish, rice, fruits and vegetables all artfully arranged in tightly designed individual pieces makes the food colorful and unique. No two pieces of sushi are really ever exactly the same. The cleverness of Asian restaurants like these conveyor sushi ones are truly bringing a new spin to dining world wide. I have in recent years seen these sorts of places popping up in restaurants and shopping malls as well as the more cosmopolitan world’s of large business center cities from coast to international coast. It is quite possibly the next leap in eating out, and it is here right now!