Interesting Facts About a Japanese Sushi 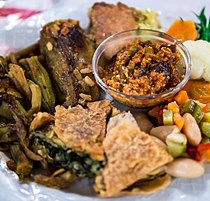 Sushi is one of the most popular Japanese foods. It is a complete dish with raw fish and rice as the primary ingredients. The distinctive quality of Japanese rice sticky when it is cooked makes it appropriate for sushi. Japanese sushi is said to be “vinegar rice” in most Japanese cuisine because the rice used in sushi are seasoned with sugar and vinegar. This traditional Japanese dish often topped with other ingredients including fish, various meats, and vegetables is usually dipped in condiments like soy sauce, wasabi and pickled ginger before eating and it is eaten with chopsticks or by hand. Health Benefits Eating Japanese sushi could give health benefits. The two main ingredients namely raw fish and rice are great source of high protein, carbohydrates, vitamins, and minerals and importantly has low fat content. Such fat found in Japanese sushi is mostly unsaturated fat. An example is Omega-3, good for the heart. There is no fat introduced in sushi’s preparation for it is served raw. The high levels of protein in Sushi are found in fillings. These are fish, tofu, seafood, egg, and many others. The vegetables used for sushi are rich source of minerals and vitamins. And the rice and the vegetables used are sources of carbohydrates. Health hazards Since one chief ingredient of Japanese sushi is fish, it does not mean it is free of health hazards. Fish like tuna especially blue fin contains high levels of mercury. It poses some danger when these are consumed in significant amounts. For this reason, since January of 2008, only a number of New York City dining establishments serve tuna sushi with sufficiently high mercury content that a weekly reference dose is limited to 2 to 6 pieces. This will depend on the quantity of tuna in the sushi and the weight of the person. Undercooked seafood and salty condiments The Vibrio parahaemolyticus is a bacterium that grows in undercooked seafood. This can cause intestinal problem like diarrhea. Sushi also can be a mode of transmission of parasites and pathogens. So, it is important that sushi is properly prepared to avoid any problem. Salty condiments like soy sauce are usually combined with sushi by the diner in whatever amount is desired. Such salty condiment can be dangerous to people with hypertension or renal disorders if overly taken. Conveyor belt sushi restaurants A well-known and inexpensive way of eating sushi is in restaurants with a conveyor belt sushi and sushi train. These unique restaurants are widely found in Japan and are becoming large in number abroad. The sushi in this restaurant is served on color coded plates. Each color denotes the cost of the sushi serving. The sushi plates are placed on a moving strip or platform. Customers choose their desired plates as the belt or boat passes. They let the food pass if they do not like it, and the other customer could take it as it passes them. The customer’s bill is tallied by counting the number of plates of each color they have taken. This unique way of serving food is also now being adapted in Japanese restaurants in other countries. It saves a lot of space and customers are able to get their orders fast. Minimalist Japanese style The traditional serving of sushi is inspired by simplistic and minimalist styles. The food is usually laid in basic symmetry, in wooden and monotone plates. However, small sushi restaurants do not use plates because the food is eaten directly off from the wooden counter.